Medical Writing Authors and Authorship Letter from the Editor 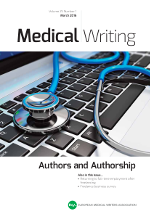 Letter from the Editor

In 2012, the journal’s precursor, The Write Stuff, became Medical Writing under the guidance of then Editor-in-Chief Elise Langdon-Neuner. The Write Stuff had been managed almost single-handedly by Elise, and the shift to a publishing house was designed to simplify operation while bringing the journal to a wider international audience that included subscribers outside of EMWA. As part of this, the journal adopted a more academic look, style, and name.

Later the same year, Elise stepped down, handing the editorship over to me. The last three and a half years has presented a variety of challenges but also many rewards. I feel strongly that we have added to the depth, quality, and usefulness of the articles.

Over the years, I have had informal discussions with many EMWA members about what they would like from the journal. Some of the main suggestions were to move away from the academic look and feel of the journal, make the journal open access, and eliminate copyright. We worked hard to address some of these issues, but most were unattainable due to the limitations of our contract with and the operations of our publisher.

On January 1, we shifted Medical Writing to a printing house, moved control of the journal in-house, and added an Editorial Assistant to help handle management of the journal. This created the opportunity to seriously consider the suggestions I have received overthe years.

As part of our contract with our former publisher, copyright for all content had to be assigned to EMWA. Elise and the EMWA Executive Committee worked hard to ensure that copyright remained at least with EMWA and not the publisher. However, this still created an awkward and complicated situation, not to mention a lot of concern, especially by our freelance members.

Copyright assignment is no longer necessary as of January 1. Copyright will now remain with the authors. This means that authors can now reuse or republish all or part of their text without asking for permission. We only ask that if text is used verbatim, authors cite the original publication in Medical Writing and state that it was first published there.

You might have noticed the new look of this issue. I hope that you like it. Every issue will now have a different cover. We also selected fonts and formatting, not to mention colour images, to give the journal a more magazine-like look. Our aim is to better reflect that Medical Writing is a combination of a journal, magazine, and professional newsletter and not an academic journal.

The idea of making Medical Writing open access had been tossed around for several years, but each time the issue was raised, it was voted down out of concerns that it would cause EMWA to lose members. Following a discussion on LinkedIn, we decided to let EMWA members vote on it. Based on the responses to that survey and considering practical issues in running the journal website, we have decided to make all feature articles available open access. Regular sections, however, will remain limited to EMWA members. In addition, the journal will now appear on Google Scholar and therefore also on Google, which should increase the international profile of EMWA, our members and contributors to the journal.

Access to Medical Writing, and The Write Stuff archive, is now available at journal.emwa.org and will no longer be available via the publisher’s website. New versions of the instructions for authors and the template for writing feature articles can also be found there. The website features a nice search option as well as author bios, with the eventual goal of linking them to Google Scholar profiles.

Tell us what you think

We hope that you like these changes to Medical Writing. If you have any comments or suggestions, or if you are interested in getting involved or contributing an article, please write to us at mew@emwa.org.

Authors and Authorship
Letter from the Editor
President’s Message
Ghostwriting prevalence among AMWA and EMWA members (2005 to 2014)
The sun never sets on transparency
GPP3 – what is it, why is it necessary and what is new?
Attribution, advocacy, disposable authors, corporate ghosts and cultural assimilation: new themes in the ethical critique of commercial medical literature
Perspective from a leading scientific author: An interview with Professor Ruth Roberts on authors and authoring
Authorship of clinical trial documents
Project management in medical publication writing: A less explored avenue in pharmaceutical companies and clinical research organisations
Never say never! Returning to full-time employment after freelancing
Fifth EMWA freelance business survey
Journal Watch
In the Bookstores
The Webscout
Regulatory Writing: Authorship issues in regulatory documents
English Grammar and Style
Medical Communication
Lingua Franca and Beyond
Gained in Translation
Medical Writing Teaching
Profile: An interview with Phil Leventhal
EMWA’s 2016 Webinar Programme
Out on our own