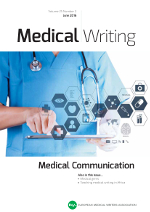 Profile - An Interview with Juliane Chaccour - Writing in Mozambique

On her private Twitter profile, Julie (Juliane) describes herself as “freelance medical editor, mother, immunologist with an interest in tropical diseases and vaccines”. Julie works as a freelance medical writer and editor, is managing editor at Clear Science and is also our EMWA Twitter manager. From May to August 2015, she was teaching medical writing in Mozambique. Yes, for four months, you received EMWA tweets from the African bush! The panorama picture shows the view only 500m from the research centre, the second picture shows Julie at her internet desk – there are certainly worse places to work from!

Medical communication writers: Who are they and what do they do?
EMWA News
President's Message
Suggested reading in recent issues of European Science Editing
Medical affairs writing: A key role to relay medical information to everyone
Top ten questions about careers in MedComms
Staying ahead of the game in the changing arena of ethical medical communications - Viewpoint of a freelance medical writer
A PhD and medical writing: A good match
Writing for pharmaceutical or medical device companies: A survey of entry requirements, career paths, quality of life, and personal observations
Medical Gems
The request for proposal process: A brief overview for trainee medical writers
Winners of the Geoff Hall Scholarship Essay Competition
Abstracts from the EMWA Spring Conference Poster Session
News from the EMA
Journal Watch
In the Bookstores
The Webscout
Regulatory Matters
Lingua Franca and Beyond
Gained in Translation
Medical Writing Teaching
Profile - An Interview with Juliane Chaccour - Writing in Mozambique
Letter to the Editor
Out On Our Own