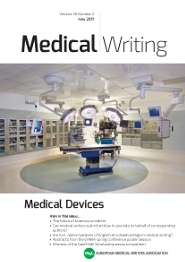 Transparency – left to its own devices until now

Transparency has been an objective in the pharma world in recent years, culminating in the recent decision by the EMA to release full clinical study reports into the public domain. In spite of the publicity surrounding transparency and data sharing in pharma, the world of medical devices has largely flown under the transparency radar, but change is on the way. The final text of the long-awaited Medical Device Regulation was published in late February, and jumped the final hurdle of adoption by the European Parliament in April. This overhaul was prompted by scandals surrounding silicone gel breast implants and metal-on-metal hip replace - ments in the early 2010s that highlighted the lack of oversight and transparency. So why is this important and what are the implications for transparency?

Medical Devices: An exciting industry at a crossroads
President's Message
EMWA News
Writing for medical devices compared to pharmaceuticals: An introduction
Clinical Evaluation Reports from the medical writer’s perspective!
New EU medical device regulations: Impact on the MedTech sector
Medical Device Regulation: A necessary step towards more patient and user safety
Transparency – left to its own devices until now
Medical devices in the disclosure era and the role of medical writers
Does standardisation improve animal testing of medical devices?
Puns, promises, and metaphors: Medical device trade names
French breast implants, the Medical Device Regulation, and a theoretical case study
Science journalism: In search of a new identity
Can a medical writer submit a manuscript on behalf of a corresponding author?
To be or not to be – Are medical and scientific writers of non-native English origin at a disadvantage?
Winners of the Geoff Hall Scholarship Essay Competition
Good medical writing saves lives: The perspective of a former medic
Good medical writing saves lives – and even a little comma can make a difference
Abstracts from 44th EMWA conference Poster session
News from the EMA
Journal Watch
Gained in Translation
Getting Your Foot in the Door
In the Bookstores
Regulatory Matters
The Webscout
Good Writing Practice
Profile
Out on Our Own