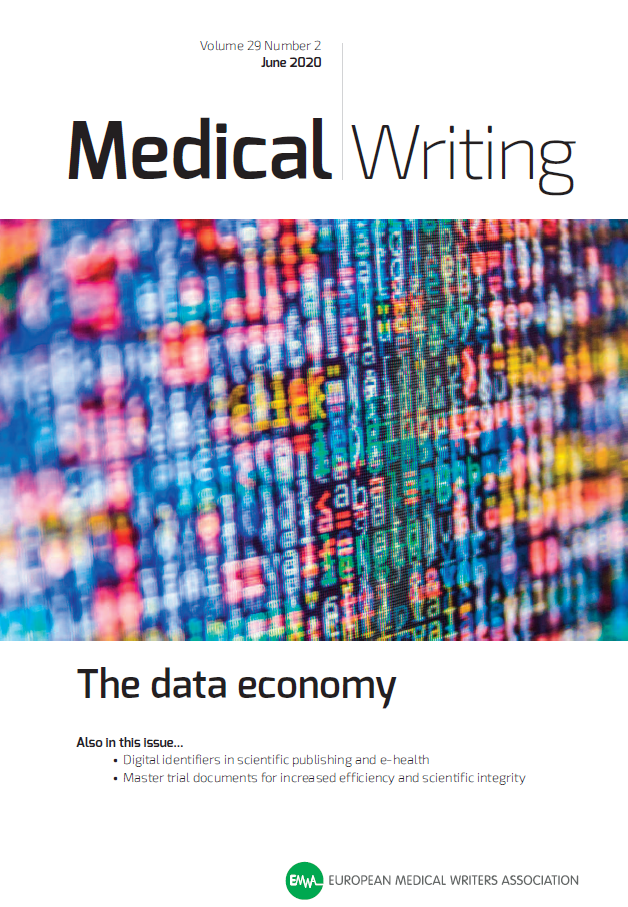 The Geoff Hall Scholarships are given in honour of a former president of EMWA. Geoff was a very special person, an extremely valued member of EMWA, and a very good friend to many EMWA members. He firmly believed that the future of EMWA lies in our new and potential members, and so it’s a very fitting legacy that we have the Scholarship Awards in his memory. The scholarships are awarded annually on the basis of an essay competition, and the title of this year’s essay was “How would you go about identifying a predatory journal?” This year’s scholarship winners were Adriana Rocha and Petal Smart.

Editorial
The data economy: A glossary
Presidents' Messages
EMWA News
EMWA’s newest special interest group: Sustainability SIG
Rush to publication – What do we have to lose?
The value of registry data in the clinical evaluation of medical devices
Big data in clinical research: Present and future
Leveraging standardised data in response to the novel coronavirus outbreak
Biostatistics, data management, and medical writing: A multidisciplinary approach to the development of the CTD integrated summaries
The new value of clinical data in Europe
Unlocking the potential of patient data through responsible sharing – has anyone seen my keys?
COVID-19 contagion, information, and misinformation
"Processing health-related data for scientific research: Is consent an appropriate legitimate ground?"
An interview with Cathal Gallagher of EMA’s Technical Anonymisation Group
A role for medical writers in overcoming commonly held misconceptions around FAIR Data
MyData: Applying human-centric principles to health data
Thriving in the data economy as data-fluent PhD graduates
Digital identifiers in scientific publishing and e-health
Winners of the Geoff Hall Scholarship Essay Competition
News from the EMA
Regulatory Matters
Regulatory Public Disclosure
Medical Devices
Getting your Foot in the Door
Journal Watch
Veterinary Medical Writing
Good Writing Practice
Out on Our Own