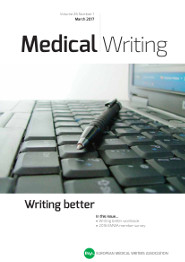 Time to say goodbye.
As I will step down from my role as EMWA’s Public Relations Officer in May 2017, I will no longer be on top of the EMWA news and will, therefore, step down from my role as section editor. It is with great pleasure though that I introduce my successor, Evguenia Alechine (“Jenia”), who will take over from the June issue onwards. Jenia is an instrumental part of the Twitter team and, as such, “on top” of EMWA news. Therefore, she is the ideal successor. Jenia’s move also shows the opportunities you face when volunteering for EMWA. Being her first EMWA conference in May 2016, she is now becoming section editor.
Certainly, the good job she did so far and her adorable personality were prerequisites for this fast move.